The new Sagan Om Alltings Förträfflighet single ‘6 år’ premieres today at Meadowmusic.se! The 18 minute lofi monster is available on Spotify and other streaming and download services as of today.

A bonus track from the Sagan Om Alltings Förträfflighet album sessions was uploaded onto SoundCloud today. The song is called ‘Sväva lätt’, check it out here:

The eponymous debut album by Sagan Om Alltings Förträfflighet is out now on Spotify and iTunes! The album features eleven songs that I wrote early in the summer of 2012. The plan was originally to write and record the whole album in just two month’s time, just to pose some limitation on the process in order to help creativity. Unfortunately I damaged my voice when I started recording the vocals for the album, and it took a whole year before I fully recovered. I managed to record most of the vocals in the summer of 2013, and then I finished mixing it in the summer of 2014. Summer might be all over this record, although there are obviously some dark clouds hovering above from time to time. Swedish summers generally offer quite a bit of rain… 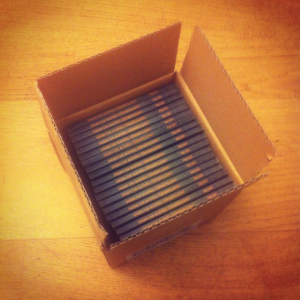 “Kvasivärld”, off the upcoming debut album by Sagan Om Alltings Förträfflighet, is now streaming on Spotify. The album, featuring six more songs, will be made available through digital services, such as Spotify and iTunes, later this fall.

The gig with Tiny Union last Wednesday night went really well! The venue (Landet) was pretty much packed with people and we got a lot of nice comments from the audience post-gig, which was nice! The band that played after us, Brödet, were really good, so it was nice to catch their gig as well. At the moment we’re looking for a new rehearsal space, and once that is sorted, we’ll get on with the songwriting and hopefully book a few more gigs!

I recorded guitarist Vitor Celestino and drummer/percussionist Neto Oliveira again last Thursday in KMH’s Studio 2. This time around they brought Guto Lucena, who played flute and soprano saxophone. We recorded live takes of two Brazilian songs with everyone playing in the same room together.

Last night I went to see Jonatan Larson, who plays drums on the upcoming Sagan Om Alltings Förträfflighet album, play with The Royal Concept at Debaser Medis. They played an absolute killer show, I was actually quite blown away by their energy, this being the first time I saw them live.